Remember Why We Celebrate Memorial Day

When we think of Memorial Day, we have visions of parades, going to the beach, enjoying a picnic in the park, or gathering with family and friends for a barbeque. But, as most of us know, this is a special day to honor military members who made the ultimate sacrifice for our country. Many of us will be visiting the gravesites and memorials of the men and women who served and died performing military service for our country.

﻿The History Of Memorial Day

This year, Memorial Day is on Monday, May 28th. Memorial Day was first known as Decoration Day. It originally honored only those who lost their lives while fighting in the Civil War. In the spring of 1865 at the end of the Civil War, people throughout the U.S. held tributes to fallen soldiers by decorating their graves with flowers on Decoration Day.

General John A. Logan of the Grand Army of the Republic, proclaimed that the first Decoration Day be observed each year on May 30th.  On the first Decoration Day, General James Garfield made a speech at Arlington National Cemetery where 5,000 attendees decorated the graves of the more than 20,000 soldiers from both the Union and Confederacy. It was during this time that the federal government established the first national cemeteries.

Americans in the northern states followed suit with their own commemorative events, and by 1890 each recognized Decoration Day an official state holiday. Southern states honored their dead on separate days.

After World War I, the holiday evolved to commemorate American military members who died in all wars. In 1966, the federal government declared Waterloo, New York as the official birthplace of Memorial Day. They chose this city because, on May 5, 1866, Waterloo closed businesses so residents had a day where they could decorate the graves of soldiers.

However, a number of other cities claim to be the birthplace of Memorial Day. These include:

In 1968, the U.S. Congress passed the Uniform Monday Holiday Act, which established Memorial Day as the last Monday in May. It went into effect in 1971 and Memorial Day has been designated a federal holiday ever since.

Today, cities and towns across America hold Memorial Day parades each year along with military personnel and members of veterans’ organizations. Some of the largest parades take place in Washington, D.C., New York, and Chicago.

What Will You Be Doing On Memorial Day?

When Congress made Memorial Day into a mandatory three-day weekend with the National Holiday Act of 1971, it, unfortunately, caused some to think of it as a vacation weekend and to be distracted from the spirit and meaning of the day.

Some people confuse Memorial Day with Veterans Day. Veterans Day is a commemoration of all the individuals who have served or are currently serving in the nation’s armed forces.

Memorial Day was specifically enacted to honor those who died while serving the country. Because we also think of it as a “beginning of summer” celebration, this can tend to minimize the true meaning of Memorial Day.

Because of this, Hawaii Senator Daniel Inouye, a World War II veteran, introduced a Congressional measure to return Memorial Day to May 30 in 1987. He continued to do so every year until his death in 2012. In 1999, he wrote:

“Mr. President, in our effort to accommodate many Americans by making the last Monday in May, Memorial Day, we have lost sight of the significance of this day to our nation. Instead of using Memorial Day as a time to honor and reflect on the sacrifices made by Americans in combat, many Americans use the day as a celebration of the beginning of summer.” 3

Without the sacrifice of the men and women in our Armed Forces, we wouldn’t enjoy the freedoms we have today. Even if you’re having fun celebrating this Memorial Day holiday, we should all take a moment to remember them.

Civil War – Approximately 620,000 Americans died. The Union lost almost 365,000 troops and the Confederacy about 260,000. More than half of these deaths were caused by disease.

Operation Freedom’s Sentinel – 48 service members have died as of May 2018.

Operation Inherent Resolve – 61 service members have died as of May 2018. 1

A national moment of remembrance occurs at 3:00 p.m. local time on Memorial Day. Please join us in taking the time to remember and thank all of our fallen military members. 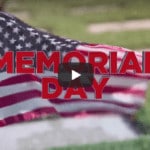