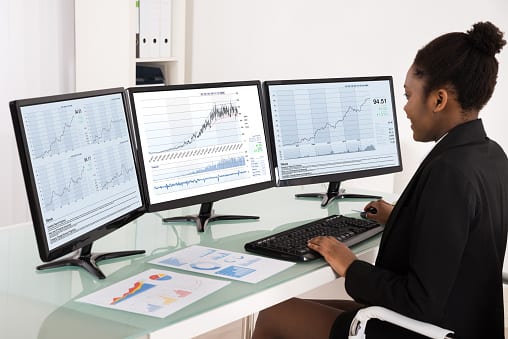 Walking into an IT department in most offices may make you feel as though you’re in some futuristic movie:  with multiple screens shifted at all angles, all with variations of code scrolling across them.  While this isn’t unexpected from a technology team, how can you evaluate whether or not multiple monitors are helpful for your business users?  When trying to determine whether they’re a productivity booster or simply offering your business users more virtual real estate to play on social media, you’ll want to consider a variety of factors such as available desk space, job requirements and yes — the cost.

Humans do many things well, but not necessarily many things at the same time.  The potential distractions available when you have multiple monitors is exponential, as you’re offering workers that much more space to open additional windows into their tasks.  Multitasking has been shown to reduce job satisfaction, impair cognitive function and distracts us, as well as dividing our attention and sabotaging our performance.  Multitasking is actually a misnomer, as essentially what’s happening is that your brain is hopping back and forth from task to task very rapidly, which can damage our ability to think deeply and creatively in the long term.  What has been considered a boon on a resume in the past (“excellent multi-tasker”) might well become a detriment as businesses look for individuals who can dig deep, focus and solve tough business challenges.

When you’re considering adding a second monitor to any desktop setup, there are two space requirements you have to keep in mind.  The physical space required on the desk and whether the user will still have enough room to balance a coffee cup, notepad and pen and the digital requirements of having enough system resources to keep things running efficiently and latency-free.  The physical desk space may not seem like much of a challenge until you attempt to fit two large monitors on a desk and see how far away from your user will need to sit to view them effectively and without eye strain.  Creating a physical setup that helps maximize efficiency is particularly important in call center environments or when there are significant requirements for contract review or other paperwork, for instance.  Ensuring that you have covered any additional video card requirements and ensuring that you have a swift enough processor will keep programs opening, closing and moving swiftly as well.

While monitors have come down a great deal in cost in recent years, adding a second or even a third monitor can cause some unexpected expenses.  For instance, while many computers will support up to two monitors, adding a third monitor often requires a special video card in order to get everything properly connected.  The cost of two monitors is generally higher than a single widescreen monitor, but this setup can be more effective than a single widescreen monitor simply because the separation between the monitors often allows the mind to separate work functions more effectively.  If you’re using a laptop, having an additional monitor may be a bit confusing as you’re often looking at two differently-sized monitors, which can be incredibly distracting.  When you purchase dual monitors, it’s best to get exactly the same brand and style so the screens line up effectively.  A large organization can be facing a massive cost impact to add second monitors at every workstation, and even small businesses will feel the pinch of the additional cost — which may or may not be offset by the productivity gains.

Anyone who has used a setup with multiple monitors can tell you that having the additional space available is highly beneficial, especially for jobs such as programmers, designers, social media gurus and anyone working with video.  Using a single monitor setup would be difficult if not impossible, due to the requirement of switching back and forth between various tasks, software, and workspaces on a regular basis.  Some experts believe that productivity is increased by more than 40% when using two monitors, while other studies have shown that errors are reduced as well as improvements found in the level of employee stress.  This isn’t difficult to believe when you consider the challenges associated with flipping back and forth between programs in order to transfer information between software packages.  Fewer clicks can equal a faster workflow, especially important in today’s world of rapid-fire communication. Many organizations have implemented a hybrid model, where some teams utilize two or more monitors based on business needs, while other employees work with a single monitor.

If you’re considering dual monitors to boost productivity or you are too concerned about distractions to take the plunge, our technology professionals can help you work through the various scenarios to determine what will work most effectively for your organization.

Do You Share The Same Ransomware Vulnerability as Knoxville?

Knoxville Hit By Ransomware - Do You Have The Same Vulnerability They Did? The city of Knoxville is the latest…