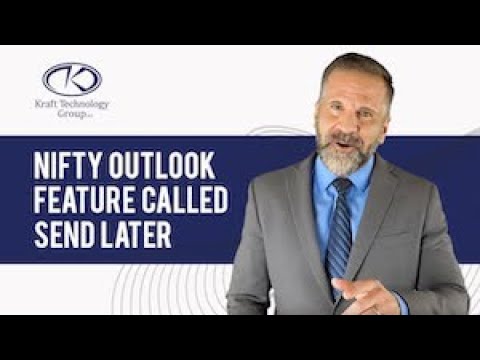 Continuous learning is a must for any leader. Microsoft founder Bill Gates once famously told Time you never really get old until you stop learning. However, business leaders also have to learn what they need to know, and what they need to delegate. Understanding this difference is a critical step toward building a powerful and stable enterprise that can withstand the test of time. No matter what industry you call home, most people outside the technology environment find that IT services are definitely a delegate function. Technology changes far too fast for an outsider to stay abreast of current opportunities.

One example of an opportunity missed by many professionals is the Microsoft Outlook Send Later feature. Here are a few ways that feature can be helpful.

Emotion can be both friend and foe to the busy professional. On one hand, emotion can motivate you to push through challenging times. On the other hand, falling prey to anger or frustration can cause you to write something damaging in an email. The Send Later feature enables you to write the email now and set it to send a few hours later. That way you have time to decide if you really want the wording to remain the same.

One of the powerful features of Office 365 is the ability to work from almost anywhere in the world. The only problem is, occasionally you need to reference a document in your office or speak to a person you can’t reach. Using the Send Later feature, you can draft out some quick notes on what you want to say, and then send the email to yourself. The tool means the email can reach you when you are sitting in your office later on. That way you won’t forget or have to wade through days of email to find your notes.

One of the main drawbacks of even mild levels of success is that we can potentially get too busy to remain effective. That is why it is great to use the Send Later feature to remind yourself of needed tasks. For example, if you know you have a report to start after a meeting next Monday, why not send yourself an email reminder with the documents you need as attachments?

Because the Send Later feature is sent automatically once it is set, it can be used to make sure the most important tasks happen. You can use the feature to create an email detailing the report, complete with necessary documents as attachments. You can then set the report to send to you and backup staff the day of the meeting. That way you know someone is more likely to be present. You can even send the report a week early if it is incomplete.

Whether you are a manager of staff or a public relations expert, you may have to send mass emails from time to time. You may need to remind employees to complete new HR forms or send monthly meeting reminders out to the community. If you know you have emails that must go out at some point in the future, why not finish them now? The Send Later tool lets you send those emails whenever you have time, secure in the knowledge that they will reach recipients when needed.

Your company’s software tools are only as useful as your understanding. That is why it may be important to consult with IT professionals on how to best maximize software resources. Kraft Technology Group is your Nashville IT services partner for Office 365 assistance in the Nashville area. Contact us today to talk about how we can move your organization forward.