Is The U.S. Government Planning A Special Tax On Paper Waste?

Do you use 800 million pounds of paper each year? That’s the latest estimate for the average professional – and nearly 20% ends up in landfills. Would your habits change if you were taxed on paper consumption? 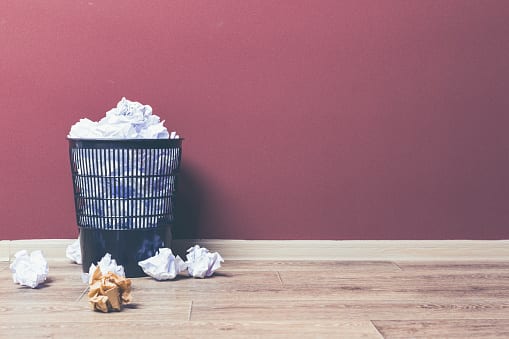 The use of paper to record thoughts, plans, transactions, agreements, or anything at all, is nothing new. Ancient Egyptians invented the earliest known type of “paper”, named papyrus from the plant which the material was created. The more modern forms of paper are likely created from a process similar to that invented by the Chinese, who remain the leading paper manufacturers today.

The ability to document everything from knowledge and information to financial transactions and taxes brought the foundation of the technological era – though not quite as we see it today. For the first time in history, accountability no longer relied on memory or spoken word, but the origin of the “paper trail” concept.

One of the earliest modern ways we’ve found to scale back paper use is the predecessor to the smartphone, the personal digital assistant (PDA), like the Palm Pilot. Migrating from paper planners to a handheld organizer enabled professionals to have easy calendar access, along with a variety of other resources like the Internet and telephone.

The intended purpose of technology is to improve our lives and simplify our tasks. For example, email was designed, in part, to expedite communication in a cost-efficient manner. Written communication that previously took more than a week to deliver via U.S. mail with the added cost of a postage stamp and envelope – also relying on the correct mailing address of the recipient – was now nearly free and instantaneous. The fax machine was intended to serve this same purpose of timely delivery, but still involved paper waste. In fact, fax machines created a unique problem: the sender had to have a print copy to scan and fax, and the recipient thus received a paper copy of the message. In the case of email, technology should decrease the use of paper, and successfully has.

The average professional has indeed cut back on paper use. Statistics vary, but no matter how you look at it, we consume far too much paper for the amount of technology we have at our disposal. Notice the word “consume”? The sad reality is that not all consumed paper is used. Have you ever visited a print station only to have to dig through sheets to find the printed document(s) you’re looking for? How many times do you see the same sheets that never get picked up?

Companies like Microsoft are trying to facilitate less paper consumption, and therefore, less waste. From online storage with Microsoft OneDrive or SharePoint, where users can store, share, and access files from anywhere without needing to produce paper copies, to collaborative software solutions like Microsoft Teams or Microsoft Project which help groups jointly communicate in real time, modern solutions are geared toward less paper consumption.

One industry where paper consumption has significantly decreased in recent years is the medical field. Patient charts used to be entirely paper, including test results, office visit notes, and full patient history. For large medical practices, this involves a lot of expensive real estate for a physical item that isn’t often used. The movement toward electronic health records is more efficient in every way: cost savings for less paper and less space taken, easy to share and access from anywhere, and less chance of a test result or document getting lost or damaged.

Banking is another industry to vie for the record of worst offender in terms of paper consumption. Between lending for auto purchases or mortgages and account statements, banks recognize the high-consumption of paper and have (slowly) been moving toward online signatures, email statements, and digital records.

Even major metropolitan areas are jumping on the “green” bandwagon. Bike lanes are being rolled out in cities across the country. Mass transit light rail systems are being installed and adopted for easy navigation and decreasing carbon footprints and toxic emissions. On the smaller scale, but no less important, it’s becoming more common for consumers to be emailed a receipt at a point of purchase, rather than have a paper receipt printed at the time of transaction. Most cities have designated locations to return printer ink cartridges for recycling to help cut down on waste.

So, what can you do to help cut down on paper waste, thereby cutting costs for your company?

There are so many ways technology can help decrease print usage and costs, and here are a few to get started:

It’s not unheard of to offer incentives to decrease waste, but the greatest incentive is decreasing costs for the organization resulting in increased revenue – and hopefully increased salaries! Decreased paper waste shouldn’t have to rely on staff incentives – and hopefully, it won’t come to taxation, but you never know…so let’s get ahead of the game and help ourselves while helping the planet. Saving two kinds of green – money and Mother Earth – with one effort!